At Firestorm we want our valued customers to feel comfortable in their choice of sizing, we are going the extra mile to ensure picking your size is easier. We have added key words into the title of our products to help you quickly identify what gear you are searching for.  Keep an eye out for these key words for a faster way of working out what gear is going to suit you!

Where to Ride - Motocross, Enduro and Trail Riding in Australia Finding somewhere to ride legally can often be a challenge. Here is a list of legal riding parks and tracks within Australia. Some offer camping facilities and are popular for a long weekend. Others are great just for a day ride. We are regularly updating this list. If you are aware of any addition tracks or changes to any of the below motorcycle clubs or ride parks, new websites etc just send a send us the details via our contact us page and we will update the list.

When submitting a track pl... Wiseco's new Garage Buddy engine rebuild kits offer everything you need for a bottom and top end rebuild. From the crank to the piston kit, and even an hour meter to track maintenance, everything is included in one box and covered under ...

How To Inspect and Replace a Chain on Your Motorcycle Some handy tips on how to fit and adjust your motorcycle chain. It is also a good idea to replace the front and rear sprocket at the same time. Pro-X heavy duty, o'ring and x'ring chains and sprockets available at Firestorm Motorcycles https://www.firestormmotorcycles.com.au/parts/chain-sprockets/chains/

How to Install a New Seat Cover to Your Motorcycle Inspecting your Motorcycle Sprockets and How To Replace Them

Some handy tips on how to inspect and replace your motorcycle sprockets. It is also a good idea to replace the chain at the same time. Pro-X heavy duty, o'ring and x'ring chains and sprockets available at Firestorm Motorcycles https://www.firestormmotorcycles.com.au/parts/chain-sprockets/ Wrench Rabbit Engine Rebuild Kit has everything you need for a complete engine rebuild, in a convenient all in one box. No more hassle of finding each individual part you’ll need for the rebuild. Wrench Rabbit kit saves money compared to buying the parts individually. At Red Bull Straight Rhythm, it was hard to ignore Wiseco rider Travis Pastrana's 500cc 2-stroke RM beast. Travis talks about his man's man race bike, hitting the triple-quad-triple, the backflip-scrub, and what he relies for his Suzuki 500. Vertex make it easy with eaverything you need for a top end rebuild included in these kits. Available for 2-strokes and 4-strokes.

How to: Change a Four Stroke's Piston The largest action sports competition in the Southern Hemisphere, the AUS-X Open, has concluded for 2016, and Australian hero – Chad Reed, lit the candles on both nights as he took the double race wins.

The 34-year-old from Kurri Kurri, NSW, was supreme to the entire field at the 2016 AUS-X Open, topping almost every session en route to a dominant weekend.

“It feels awesome to win the two nights here at the AUS-X Open. I felt good all weekend, and h... 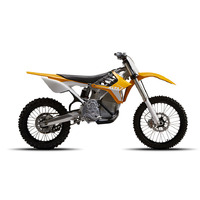 We all knew this was coming. An electric motocross bikes could produce huge advantages in noise and maintenance reduction, potentially opening up the sport in ways never thought possible. But just like in cars, the question is, when would electric technology advance to a point where it could be a suitable competitor for gasoline in terms of power, range, weight, reliability and cost?

Designed for MX2/Lites class racing, the Redshift MX has the advantage of not having to shift through gears. With constant torque the Alta Redshift MX has 2 hour run time & 1000 hour maintenance in... Luke Clout Out for rest of Supercross Season

Days after signing a two-year deal with MAD Racing/Dirt Candy Suzuki, Luke Clout’s Monster Energy Supercross season appears to be over. The Australian sustained a broken right femur in 250SX practice on Saturday at Round 4 of the series in Oakland.

“Unfortunately your femur isnt supposed too look like that, I am devestated because I was feeling really good having qualified 7th!,” he wrote on Instagram.

Clout made his debut for the team at Anaheim 2 as a fill-in for Daniel Baker, who is out for the remainder of supercross due to an ankle injury. Following a fourteenth place finish, the team announ... Check out a cool interview by Racer X's Steve Matthes below. DC SHOES: ROBBIE MADDISON'S BEHIND THE DREAM: THE MAKING OF "PIPE DREAM" International megastar Chad Reed has claimed a stunning victory in the inaugural AUS-X Open ahead of a sell-out Allphones Arena crowd at Sydney Olympic Park.

The SX1 main event was all Yamaha-mounted Reed in a popular victory upon return home for the first time in three years, using the fly by lane early on to sprint away, but he didn’t have it all his own way.

US Arenacross number three Gavin Faith (Penrite Honda) kept him in check, crossing the line six seconds in arrears, while third for Dan Reardon (CDR Yamaha) saw him extend his lead to 31 points in the championship.

That came after Matt Moss (Team Motul Suzuki) crashed out –...